With retirement and fixed income living just a few years ahead, the handwriting was on the wall for Don Wemple: Find a way to reduce living costs, or find another place to live. The answer for the Bridgewater Corners, Vermont, renewable energy expert was relatively easy in one way – he loves living in Vermont, even if temperatures do drop to minus 20 degrees (or lower) from time to time in the winter. How to accomplish the goal of near-zero dependence on fossil fuels … that was the real challenge, one that was intensified by the fact that he was starting with already existing barn, which he had hoped to convert to an energy-efficient off-grid home.

In this case that age-old question, “Do you live in a barn?” took on a whole new meaning, as Wemple joined forces with Prudent Living, Inc. of Windsor, Vermont, and Renewable Energy Systems, LLC of Bridgewater, Vermont, to design and construct Don’s retirement home. No frills, nothing fancy – just simple living in a simple place, with high tech solutions to a simple question: How can I live here, off the grid, without breaking the bank AND without negatively affecting our quality of life? 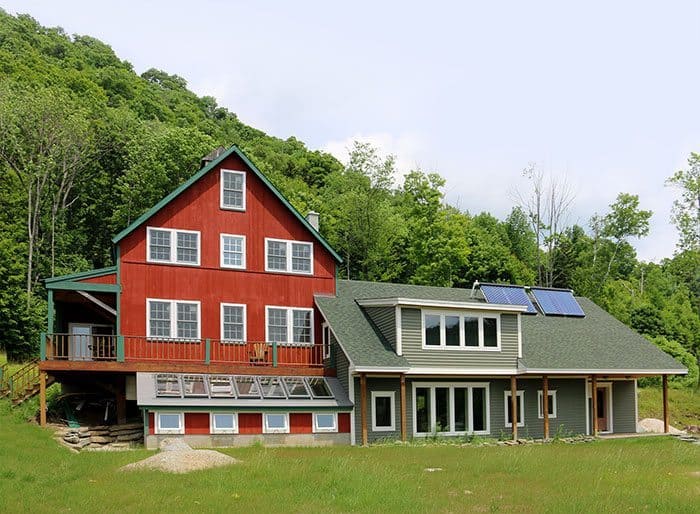 Wemple started with the goal of retrofitting an older building, which had been built before certain newer energy-saving techniques were available. “We very quickly figured out that, primarily from an insulation point of view and a logistics point of view, it would be harder to redo that building and still have a ‘zero energy home,’ so we decided to add a new section to what already existed. I focused on how to build something that would have minimal heat loads, asking questions like: What type of construction techniques are required, and what specifications would we need for R-values for walls, and ceilings, and foundation AND how to cost-effectively implement those.”

With the assistance of various experts in the field, Wemple concluded that between 25,000 to 32,000 “British Thermal Units” (BTUs) of heat would be needed to heat the home he wanted to build, on the coldest days, if he were to keep the house’s thermostats at normal, livable temperatures. Less (about 24,000 BTUs at design temperature) might be needed if the temperature were set to 55 degrees (for example when no one was there, or when certain parts of the home were not in use). These projections contributed to his choices about the type of heating and electrical systems would be required in order to provide a reasonable quality of life in that particular location.

“Starting with those numbers, we tried to figure out if geo-thermal heating could meet those heat loads, especially if no one was there – the idea being that we would have propane and/or some sort of wood heat source as backups if someone was living there. It’s very easy to accomplish 32K BTU heat loads with a wood boiler, whether it is indoors or outdoors, in one 12-hour burn every 24 hours – in fact, that’s probably overkill,” Wemple said.

“As far as the electrical system itself, basically a reasonably sized system (about a 6 kilowatt system) would probably cover all of the electrical usage, without geothermal, for a typical family of four, with very efficient appliances and lighting, but no electrical for hot water, dryer, or cook stove – or a hot tub. The domestic hot water could be supplemented with solar thermal panels, but the other uses would have to rely on propane. So in our planning, we tripled that number to include a geothermal heat source and to be safe. The real issue is your battery size and what your electrical generation sources are. In my case I have a small hydro source to supplement the solar panels, which gives me power 24/7 and is not dependent on the sun, but of course not everyone has that additional energy source,” he explained.

“In terms of photo voltaic energy sources (PV), we’re installing twenty-four panels, which will give us about 5.4 kilowatt system, keeping in mind that I get about 12 kilowatt-hours per day out of my hydro. In a highly-efficient off grid home with minimal electrical usage, you probably could get away without the hydro and just the same size PV system, as long as you had ample amount of battery storage, and a generator for backup for anything longer than two days without adequate sunlight,” he added.

For Wemple, it was exciting and challenging to set out to build a super-efficient home, because although many of the solutions were out there, they were not yet as integrated into systems and strategies as they will be in the future. So in terms of the design, the result was original to the degree that it collected information and techniques from a variety of sources and applied them to the task. “We ended up focusing on several rather innovative things,” he said. “Primary among them was insulation and insulation methods and strategies. With today’s technology, we can actually see where homes are losing heat, and it’s not just through the windows, or around the doors. Actually, there were two issues: How the heat escapes, and how the cold air works its way in. In the old days, you might frame with 2 x 6’s instead of 2 x 4’s, throw in or blow in some insulation, and assume you had it solved. But that approach didn’t really hold ‘heat’ so to speak, because it didn’t deal with the heat that was lost to the outside through the 2 x 6’s themselves, not to mention through all the nooks and crannies that people using such techniques might create in their design to make their house look more attractive to the eye. A far more efficient approach is to seek methods that use as little wood framing as possible, and to insulate those areas thoroughly, inside and out.”

From the foundation up, the project creatively applied the most recent theory and developments in insulation technology and products in order to minimize heat loss through any part of the structure. “Every piece of concrete, including the frost walls was completely isolated from the ground,” said Tim Biebel, Vice President of Prudent Living Inc. “We surrounded the slab with R20 insulation (R value is a measure of the degree to which something is thermally isolated; the higher the better). We accomplished this with two, two-inch layers of foam board underneath a relatively thin slab, because studies have shown that a thinner slab retains heat and releases it more efficiently than a thicker slab. The heating tubing is engineered right into the foundation and floor construction, so radiant heat is available when needed from the floor, itself, and not just from a secondary source such as a wood stove.”

“When we got done, there was a continuous insulation barrier all the way from the foundation to the roof,” added Paul Biebel, President and Founder of Prudent Living, Inc. “We minimized the amount of studs in the walls, and in the corners, so we could insulate out and around them all, in addition to the insulation that was designed into the walls themselves, as in ‘normal’ construction. We built what amounts to a ‘balloon’ frame, with the second floor hung on the inside wall so the insulation could carry continuously up from the floor without air loss or leakage between floors like in a typical house.”

While all methods used in the construction of Wemple’s house complied with local building codes, there was enough leeway to take a “road less traveled” in relation to some of the techniques used. For example, it’s rare to find in Vermont a home that uses thirty-two inch on center studs, or a one-inch Styrofoam barrier between the rafters and plywood roofing above. But it’s also rare to find a home that one can live in comfortably for next to nothing, for as long as one wishes. And one nice thing about the electrical setup was that no permits were involved at all, because the house is completely off grid, and will be supplied with all the electrical energy it needs via the solar panels and the small hydro-electric system already mentioned.

In Wemple’s case, the “road less traveled” leads right to his nearly net-zero retirement hideaway on a hillside in Vermont, where one is far more likely to see, on any given day, trout feasting on the current insect hatch in the pond a stone’s throw from his stoop, or some deer in the back meadow or a bear wandering through the orchard, than somebody’s noisy high-end sports car making some irrelevant point about conspicuous consumption. Such an automobile couldn’t navigate Don’s driveway, anyway, which is fine with him. 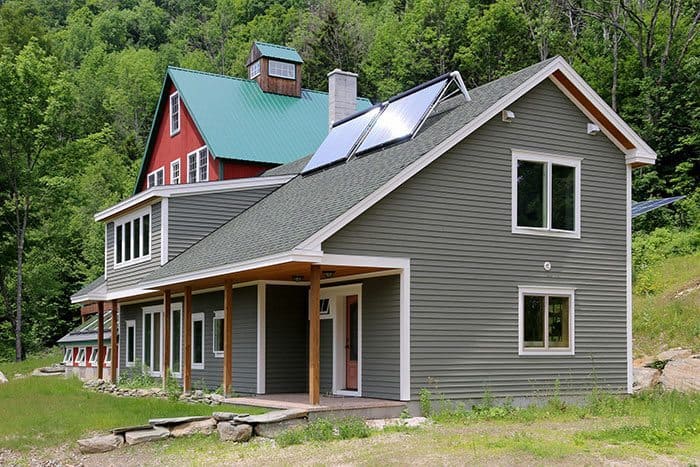 Don Wemple’s off-grid project involved multiple design-related technological issues. Some of the solutions involved innovative implementation of construction methods rarely combined in a single project, yet all focused on the goal of creating and sustaining a year-round living environment that is both comfortable and cost-efficient.

A two kilowatt Harris Micro-Hydro turbine with 180 feet of head and between 30-100 gallons per minute, depending on the time of year and water, is installed in the small stream nearby. This system will reliably produce between 500-1,500 watts of continuous 48 volt DC power.

Twenty-four two volt cells (48 volt DC system voltage) Surette 450 Amp-hr batteries can provide approximately two days of reduced power with no sun, since the hydro unit delivers about 10-15 amps of continuous charging power depending on the time of the year and water flow conditions, even when the sun is not shining. A system powered with only solar PV would probably need to double the storage capabilities of the battery system.

Four 4.4 kilowatt 240 volt magnum Inverters installed in parallel. The master inverter #1 generally runs continuously with inverters #2/3/4 in sleep mode until additional AC power is required. A total of 17.6 kilowatts of continuous power is available, due primarily to the use of the geothermal heat pump which consumes significant amounts of electricity. The typical house or camp without geothermal would probably need only two inverters (8.8 kilowatts, total).

A 2-ton Waterfurnace heat pump is used with the 400 foot well (standing column design) as the primary heat source, especially during the March-December timeframe. Water pumped from the well flows through a heat exchanger in the heat pump at five gallons per minute, removing about five degrees of heat from the water as it passes and is dumped back into the well. Water is pumped from the bottom of the well with a variable speed three-phase 240 volt pump and controller and dumped back to the well at the 150 foot level. The cooled water is heated by the ground as it sinks to the bottom of the well. The same well provide domestic water.