Jeannie and Amos Kornfeld of Norwich, Vt. had two goals in building a new home: now, that their youngest son had gone off to college, they felt it was time to downsize, and they wanted an energy-efficient home that was in good shape. They also wanted to remain in Norwich, where they had lived for the past 14 years. “We like the town, the people, the landscape, the recreational opportunities and living in the town in which I work,” said Jeannie. The only problem was that when they went looking for a home to meet their needs they discovered that “what we were looking for didn’t exist,” said Jeannie.

They did, however, find a plot of land on Upper Turnpike Road in Norwich and began making plans to build a smaller, energy-efficient, high-performance home to meet their needs.

Their biggest challenge was in finding the right builder and house design. Jeannie was adamant from the get-go that while she wanted a home with state-of-the-art energy features, she didn’t want one that looked like it “came from Mars.”

“Some look bizarre,” she reiterated. “I did not want to spend all this money on a house I didn’t like the look of.” 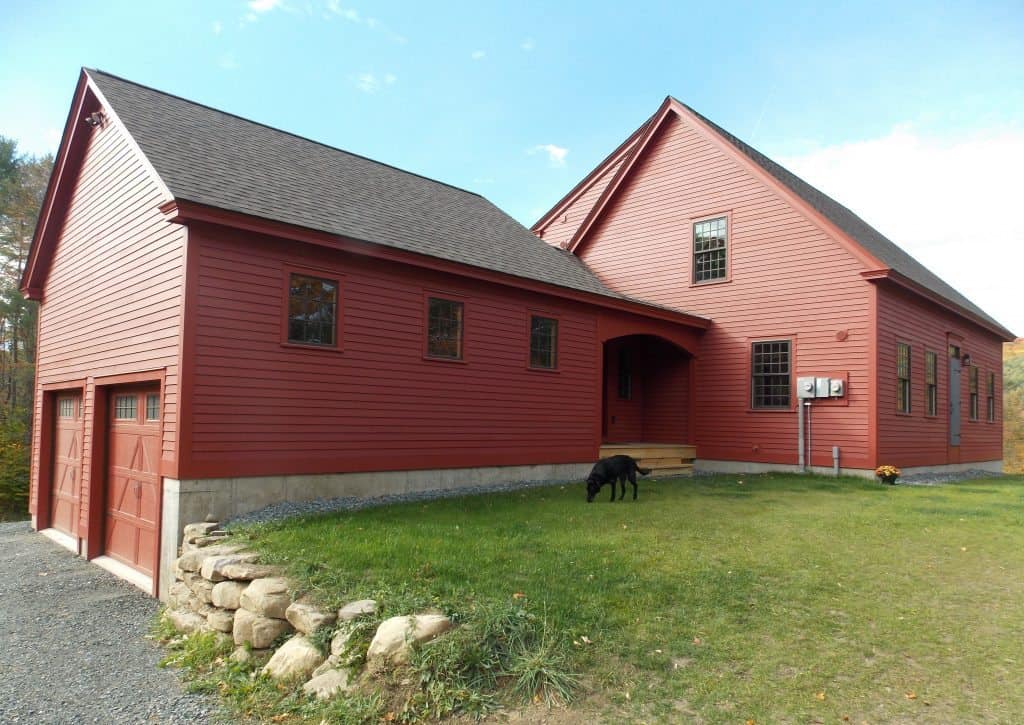 The Kornfelds interviewed multiple builders before finding one in Middlebury, Vt., whose designs they liked. Unfortunately, this company had not designed any high-performance homes. Then, the Kornfelds real estate agent, Cheryl Hermann, mentioned Biebel Builders, who had the experience in high-performance design that they craved.

“When we were interviewing builders we found only one, Biebel, who could show us a high-performance house that they had built. There was one other builder we spoke to who built high-performance homes, but I felt if we didn’t have a million dollars to put up, we wouldn’t get what we wanted.”

The Kornfields were looking for a house made from sustainable materials that would not require fossil fuels to heat. “Mostly we wanted walls that were thick and filled with cellulose as opposed to fiberglass for insulation. We wanted the house powered off of solar, generated onsite, and I liked the idea of the air-to-air heat exchange once I learned more about heat pumps. They seemed to make the house that much more energy efficient,” said Jeannie.

As an environmental science teacher, Jeannie has a particular concern for the natural world. “We have a planet that is melting in front of us. We need to stop producing carbon dioxide from fossil fuels. I was interested in getting our lifestyle disconnected from fossil fuels and using as many alternative resources as possible,” she said.

The Kornfelds did their research with Jeannie attending a course on sustainable design at Antioch. She also picked the mind of a knowledgeable friend, learning about heat pumps, cellulose, solar, and other energy efficient features.

“The first thing people [looking to build an energy-efficient home] need to do is become really familiar with the technologies and decide for themselves what they want. Once they’ve figured that out, then they can go and ask builders if they are familiar with these technologies—­have they used heat pumps before, have they installed double-wall construction, do they know how to create a tight house and then ask them to show their numbers. What are your blower door test numbers, how much kilowatt hours are people producing versus what they are consuming? Those are the questions that I could ask Biebel and get answers,” Jeannie said.

The Kornfelds have yet to make it through a full heating season, but they are anticipating that their house will actually generate more energy than it uses over the course of year.

“What I’ve learned is the difference between net-zero and high-performance has more to do with how you live than how your house is built,” explained Jeannie, “Some may argue with me about that, but you could live in our house and use a lot more energy than we are using. It’s a high-performance house because of the way its built, but you can still use more energy that you generate or you can live more simply like we do. We don’t have a drier, for example, we only turn heat on when it’s cold. These are lifestyle choices you can make, so you can meet net-zero and generate more energy than you use.”

The Kornfelds settled on a 1900 square-foot, Cape construction, downsizing from a 3,400 square-foot home. Construction lasted four months, starting in April 2016 and ending in August 2016.  They initially debated whether to go for an even smaller footprint, but decided they wanted something large enough for their children to come and visit. They boast that it doesn’t resemble a net-zero home. “When people hear net-zero, they don’t expect something so traditional looking. This looks like an Old Vermont farmhouse.

The Kornfelds could not be happier with their building team, adding that they went above and beyond in offering advice and helping with details that were not part of their designated duties. They paid attention to small things, finding a way to help hinge an old-fashioned Vermont door, by going to a local hardware store, bringing back a leather strap, and crafting something that was in keeping with the rural décor. “That’s the kind of attention to detail and thought they showed. These guys were just incredible,” said Jeannie.

“I think this should be the new standard,” said Jeannie. “The days of building conventional leaky homes out of materials that are unsafe for people to use or be around have got to stop. We need to start making healthier choices or we won’t have a planet to hand off to our children.” Author: Kim J. Gifford