From Heat Hog to Energy Star

When Bob and Dale Cunningham bought the original cottage on the west shore of Rocky Bound Pond in Croydon, NH, about ten years ago, it was just a camp – a place to open up on Memorial Day and to batten down again on Labor Day. While rustic has its charm, it also has its limits, especially when the thermometer drops to minus 20 F, and nothing’s moving

but the 40 mile per hour wind whistling across the ice and through every crack and cranny in the walls, and even the floor, which had only a crawl space under it. In this case, “rustic” also included an electric toilet – details skipped here except to say that the constant draft was helpful in dissipating the odor. 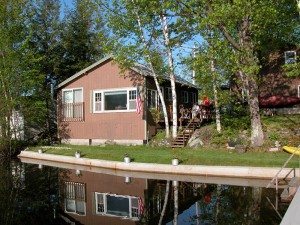 With retirement in the not-too-distant future, the Cunninghams took inventory. In the winters, they lived in an older home a few miles from the camp, but when they thought hard about where they really liked to be, the “camp” won, hands down. So the question became whether the camp could be remodeled to accommodate year-round living. They decided to consult a long-time acquaintance, Paul Biebel, because they knew his company was very familiar with both new construction and “retros,” and also because of his connection with Prudent Living Inc., which could provide expert advice on the integration of renewable energy into their long-term planning. 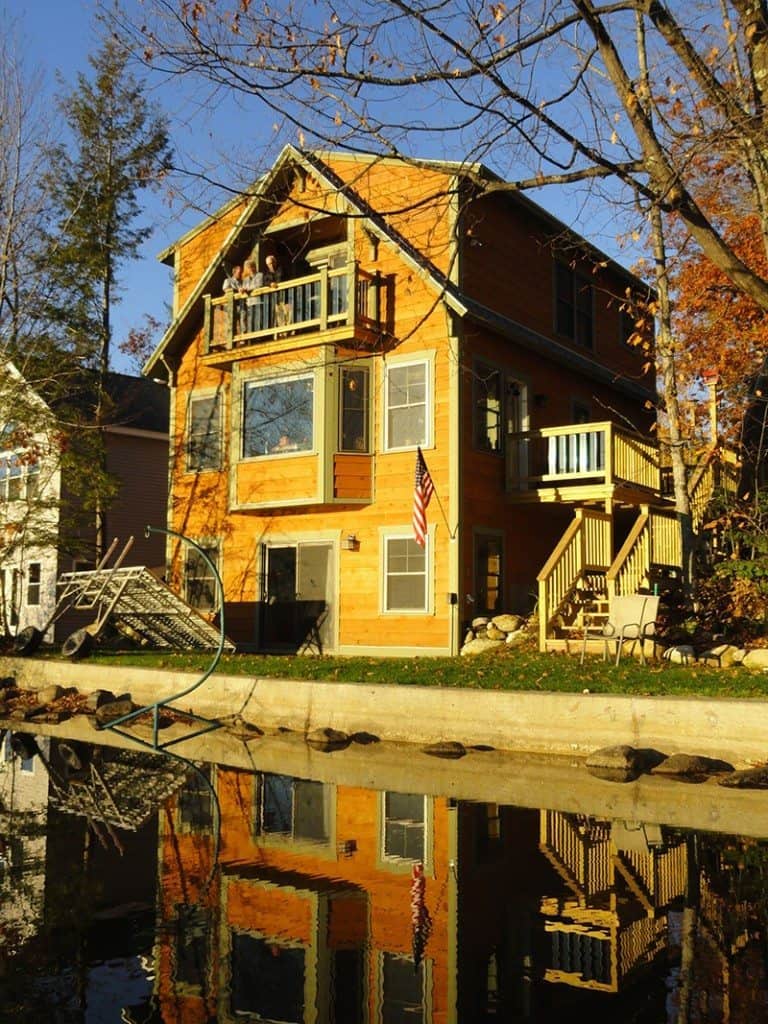 After an initial walk-through, Biebel explained that his company could certainly tighten up the old cottage through the use of a variety of insulation methods, and that the use of renewable energy heat sources could cut their ongoing heating costs. However, a much better long-term solution, in view of their plan to relocate there permanently, would be to replace the old structure with a whole new one, in which case new insulation technologies and renewable energy sources could be built right into what might become a two-story finished house, with an initially unfinished walk-out basement – a significant increase in floor space in a much more livable package.

Following a nostalgic last look at a place that had provided them so much pleasure and fun through the years, in August 2011, the Cunninghams watched the old building come down, to be replaced by a hole for a new foundation which, by regulation, could not be larger than the “impervious” footprint that had been in use previously. They counted everything allowable to come up with the equivalent square footage total. 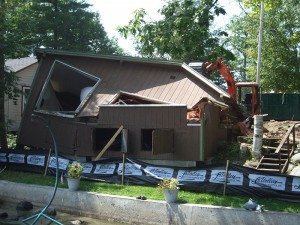 The new house went up quite quickly, by comparison, but not fast enough for Bob and Dale, who at that point had rented a neighboring “rustic” cabin so they could keep tabs on the progress, which they did daily. “The crew probably got sick of hearing us ask, ‘Is it done yet?’” Bob recalled. “But they were always nice about it, and being right there allowed us to be more involved in crucial decisions we are glad were made.”

“One of those,” Dale said, “was my request of Paul to add a French porch off the bedroom upstairs, which has become one of our favorite places to sit with a cup of coffee and watch the sun come up across the pond. We’ve also enjoyed seeing wildlife that we never saw before, like the ducks that come through in the fall, and flowers on some of the trees in the early spring. We never saw those before. It’s just a quiet, restful place to be. Seems like the view changes every day, but I can’t think of any time when it’s not beautiful in its own special way.” 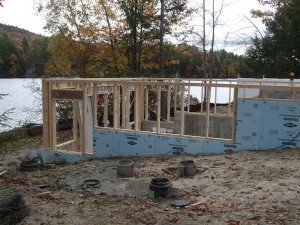 Along the way, there were many challenges, including how to build the house in the midst of certain trees that the Cunninghams wanted to keep. “We groomed down a whole side of the hemlock,” Bob said, “so we could keep it as a shield between us and the pond even in winter. And there’s a big oak tree out here that the guys were rubbing their backs against while they were putting on the siding. We really appreciated the extra effort!”

“The whole thing was done in a very tight space,” Dale added. “And we’re thankful to have such understanding and helpful neighbors. We had big delivery trucks coming in here, and a well-drilling rig. It was all pretty crazy while the place was being built. 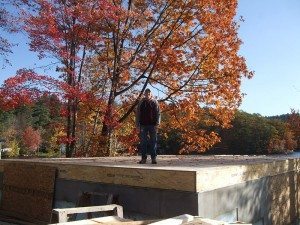 Perhaps the most significant challenge was communications with the electric power company, which required the already installed underground service to be moved in the middle of winter in frozen ground. The power company had to be educated about the power load required by the geothermal heating and cooling system that was the best renewable energy technology for the setting.

“They thought that geo thermal was going to take three to five wells, like in that past,” Bob said, “with pumps in every well and other equipment so the draw would be more than the present lines could handle. But when the engineer showed them that there would only be one well 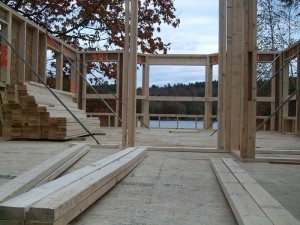 and pump, and that the whole set-up would not use more electricity than a stove, they relented. And the great thing about it,” Bob added,” was that we were going to have to put in a well anyway, so we just went a bit deeper for the geo thermal than we might have gone otherwise.” Then he said, with a laugh, “I had to trust that the technology would actually work, because, you know, it’s hard to figure out how you can heat a house to seventy degrees using heat from water that is only maybe fifty-eight degrees.”

Dale said, “I had read up on the whole idea, with Paul’s help, and it was pretty clear, even if it was a bit of a mystery, that the engineering projection was going to 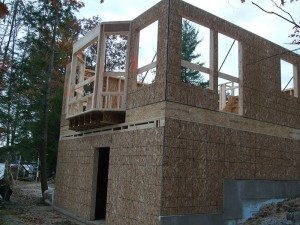 achieve my goal – living in a house that I didn’t have to buy oil for. More than anything, I was sick of having to plan all year about when to buy oil for the winter, you know, would it be lower or higher later, and so forth. With our new house, we have no oil tank at all, just even, steady heat. The air flows so gently that you can hardly tell when the heat is on. We do have propane for hot water and a backup stove in the corner, but that’s just for looks so far. In fact, our propane use for January, when we moved in, to June this year, was seven gallons. Otherwise, electricity runs the pumps, including the aerator in the septic area, so that’s our main ongoing expense.” 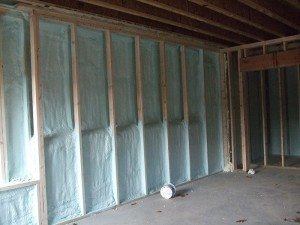 the State of New Hampshire’s Energy Star Homes Program. Biebel explains, “We had to comply with their strict performance criteria for the shell of the house. The State of NH sent their own inspector to the site, with his own testing equipment. He used both a blower door and an infrared camera. When he finished testing, he said that we far exceeded their standard requirements and that he had not seen a house test out as tight as this one. I explained to him that this is partly because we installed so much foam insulation both in between the studs as well as an additional two inches on the entire exterior. But in addition to that, we air sealed all the vertical penetrations between floors all the way to the attic, eliminating what is scientifically referred to as ‘stack effect.’ Stack effect is the movement of air between walls and partitions and floor systems wherever there is a drilled hole or open shaft. It is one of the primary causes of heat loss and unwanted air movement inside of 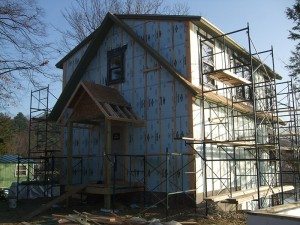 houses, and it usually acts like an internal chimney that sucks air from basements all the way up and into attics where moisture condenses and wreaks havoc with wood frames.”

He added, “Another thing we do, that is not required by Energy Star, is that as we frame up the house and begin installing studs and plywood on the exterior walls, we caulk every joint where two pieces of wood come together. That’s a lot of joints. We also caulk all the exterior plywood joints from the roof to the foundation. Inside the house, we caulk every place where a stud or wall plate rests against plywood or against another stud or wall plate. When we install windows and doors, we set them into a bead of continuous caulk and then, after they are fastened into place, we install foam around the perimeter so that there is an air tight installation. Once we finish air sealing, the only way outside air can get into a house like this is for it to come in through an open window or door. Finally, when the house is finished, and before the owner moves in, we perform a pressure test on the house to look for any unwanted leakage. This will show up on our meter and also when we walk around with a ‘smoker’ that we use to check for drafts in all the usual places. After all the testing is done, we make sure that the air exchanger is sized properly and that the indoor air quality of the home is perfect.” 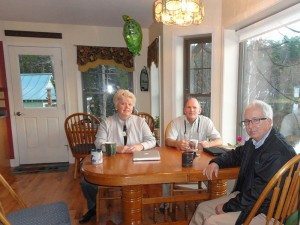 “That kind of attention to detail is the reason we are 100 percent happy with our new home,” Bob commented, with Dale nodding in agreement. “If we had it to do all over again, we would do it the exact same way, and it’s not often you hear somebody say that of their new home. And, as far as the renewable energy factors are involved, we would do those again, too, and we’ll be examining the solar electric options, too. For people who are considering something like this, we’d say don’t be shy; the only thing to lose is time. Some people look at an array of solar panels and think they’re ugly, but I think they’re beautiful. I see windmills on a hilltop and think they’re wonderful. That’s free energy. Why would you not want that?”