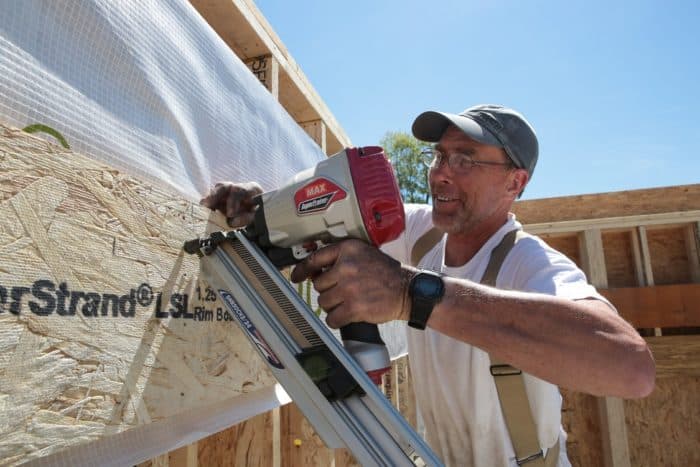 “Hey, did your deodorant give out?” I heard one guy on the crew ask another as they were stapling 1×3 strapping over the Intello Plus membrane in a tight space on the second floor of the ProHOME on a hot, humid afternoon.

Two thoughts came to mind while I stood nearby listening to the conversation take place. One, I was thankful it wasn’t me in that tight space, and two, it’s extremely important to use tools that function properly so you are able to get out of a dangerous situation like that as quickly as possible.

Max USA Corp. provided a suite of pneumatic tools for our crew to use during the ProHOME build. I must say that there was apprehension by some of the crew when they learned we’d be using Max tools because of previous poor experiences with them a number of years prior. The foreman, Todd, had purchased one in the past and returned it after using it for only a half a day. Now, more than halfway through the ProHOME build, his feelings toward Max tools have changed 180°.

The highest praise from the crew has been for the high-pressure pneumatic guns, specifically the Concrete/Steel Pinner (HN120)—so much so that I even gave it a try to see for myself. The gun is sweet. It operates just like a framing gun, but with slightly less kick, believe it or not. Nailing pressure-treated wall plates to the slab was as easy as using a framing gun to nail two pieces of wood together. The only downside to the gun is the cos—it’s a little pricey, but well worth the investment if your line of work requires lots of nailing to concrete or steel.

Since a few of the guns are high pressure, that also meant we needed to use the Max 500-psi Air Compressor (AKHL1250E). It’s compact and lightweight at only a little over 41 lb. Good thing, because we only had a 15-ft.-long air hose for the high-pressure guns, which meant it had to be moved around a lot. To put it in perspective, when I tried out the concrete pinner, the plates that needed nailing were on the other end of the house. I picked up the compressor in one hand and the gun and hose in the other, and my skinny arms carried them the length of the house with ease. True story.

The crew has only used them on one project, so I don’t want to get too far ahead of myself when I say they are great tools, because I can’t speak to their longevity. But I can say that Todd wants me to buy all the guns and the compressor because he likes them so much. With 35 years experience in the field and as tough a critic as he is, that’s saying something. Buying them would also be good news for the dynamic duo dealing with the bad body odor. No one wants to use guns that jam, especially under those circumstances and when a respirator is out of reach. Functionality is critical, and so far these Max tools have performed better than expected. 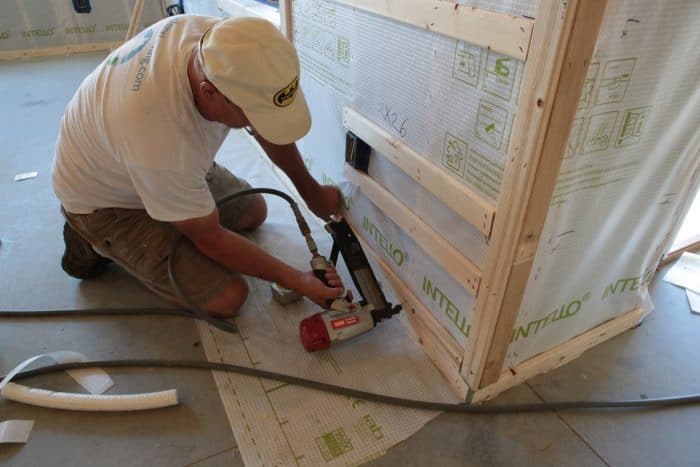 Nailing the 1×3 strapping on the first floor offered a bit more room for the crew.