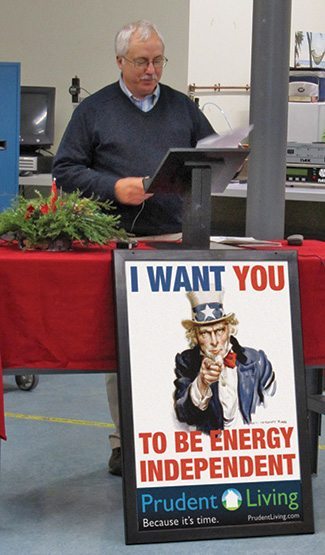 It was on February 10, 1989, when this builder and his architect suddenly discovered that life guarantees nothing. Of course, we knew this was technically true, as most thinking people do, but we weren’t living as if we believed it. In fact, everything we were doing and how we were doing it reflected the epitome of presumptuous living, not prudent living. It’s not that we were outwardly arrogant or anything like that. We just took for granted that every investment we made would prosper and that the sun would always shine upon us and that the wind would always be at our backs. Our borrowing limits were based on rosy projections and our maxed-out credit cards and bank loans were as numerous as the pages of a book. Inwardly, we thought that even while we were sleeping, our net worth would only increase and the stock market would go nowhere but up.

That all changed in a moment – a twinkling of an eye you could say. Disaster came as quickly as the morning’s sunrise and our presumption was revealed for what it was. I was enjoying a peaceful, beautiful morning with our several hundred men already at work when Ted (our banker) showed up. His complexion was pale and his pace was slow. He had personally driven the one-hour trip from his office to our site to inform me that his bank had declared insolvency and that I would not be paid for the work we had done during the previous thirty days; not only so, no payments would be ever coming from his bank again.

Without warning, we were left with nothing in our accounts and hundreds of thousands of dollars of invoices that were due to our subcontractors and suppliers and employees. I thought, My… how quickly “things” change. I didn’t realize that I, personally, was next on the list of “things” that would change. The intensity of trials that were about to hit would leave me totally sifted and without one ounce of pride or hope left. There were angry phone calls, lawsuits, and broken relationships. There were many lessons to be learned. Some were practical. Some were spiritual. But every lesson redefined my way of thinking. I was no longer the presumptuous kid I used to be, and the seed of “Prudent Living” was planted in my heart.

Nearly 3,000 years ago, the wisest man who ever lived wrote in Proverbs 22:3, “The prudent see danger and take refuge, but the simple keep going and suffer for it.” To drive his point home, he repeated the exact same words five chapters later. Prudent Living is not just another company or a store or a way for somebody to make a living. It’s about a paradigm shift – in people’s minds, and in our society – a “way of thinking” whose time has returned, because without a doubt, there are many danger signs on the horizon and not enough people who are prepared, which is the fundamental reason we founded this company – not to sell you things you don’t need, but to help you prudently prepare for an uncertain future.

Paul Biebel is the founder and visionary for Prudent Living Inc. He has also served as President and CEO of Biebel Builders, Inc, a company that has been designing and building high quality homes since 1976. Since the turn of the century, with the advent of emerging new technologies, his interests have directed him toward helping his customers make sound and prudent investments into many areas of their lives and also to the homes they live in. This passion has evolved into his newest venture – Prudent Living, a company that offers products and services that support a more prudent way of life.